Recap: G+ Interview with Dolores Huerta In One Word: EPIC! 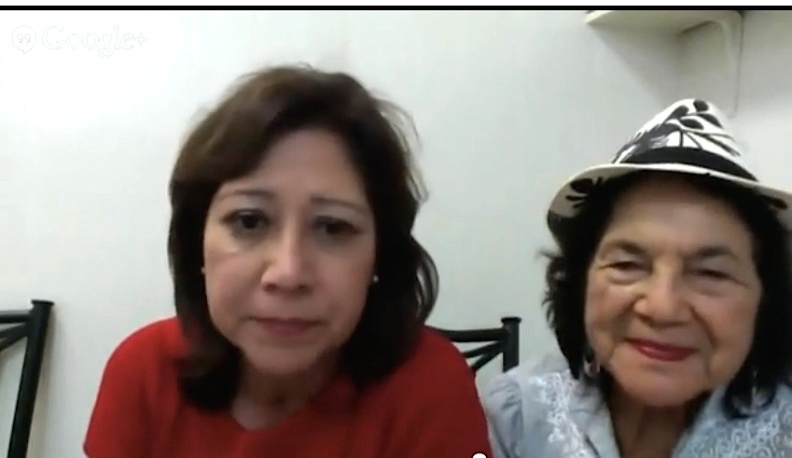 There are words that become so unjustifiably overused they trigger our collective, involuntary eye-roll reflex. Case in point, the word epic. In fact, according to the Urban Dictionary, epic has earned its place as “the most overused word ever.” Yet, I can find a better fitting word to describe last night’s hangout with civil and labor rights heroine Dolores Huerta. What I did not expect in a million years was that she would be participating in this conversation from the campaign headquarters of former Secretary of Labor and candidate to LA County Supervisor Hilda Solis, and it happened to be her primary election night. Better yet, I had absolutely no idea that Solis would actually join our conversation!! What are the chances of having not one but two Latina luminaries in the same hangout?
Come on, that was pretty EPIC, right?

The pair, who have known each other since the times of Hilda’s in the CA State legislature, are long time friends who support each other, share a common passion for social justice… all while simultaneously winning our community’s and the nation’s hearts. Hilda, for example, just won the election last night — And not but a couple of points, but by a landslide: With more than 70% of the vote, she avoided run-offs and went straight to becoming the next LA County Supervisor! From here, I send the warmest congrats to Hilda, thanks for sharing a bit of your (pre) victory with us!

As for Dolores, what can I say? At 84 years strong, this woman shows absolutely no signs of stopping — And has absolutely no qualms about speaking her mind. Not that she ever did. Among many topics, she gave us a very personal look at what it was like to be a woman — and not just any woman — within the labor movement; her views on immigration and the political games being played on Capitol Hill. She shared how she thinks we can apply pressure to the Republican party and step up our efforts for immigration and all other issues affecting the community. She’s particularly concerned about the issues where women rights and all other rights converge. I have picked out a few choice quotes from the convo, and below you’ll find links and resources mentioned during the show… but you really to watch the whole thing for yourself:

“They call it HIStory, we still have to change it to be HERstory. We should be included also.” ~@DoloresHuerta http://wp.me/pqoHY-s4

“I get a lot of recognition but it comes on the backs of those who’ve worked in the movement.” ~@DoloresHuerta http://wp.me/pqoHY-s4

“Women: We need to organize and we need to get together.” ~@DoloresHuerta http://wp.me/pqoHY-s4

To see that millions have benefited because of the work that we’re doing. That’s what keeps me going. ~@DoloresHuerta http://wp.me/pqoHY-s4

And of course, to support her upcoming birthday pachanga to benefit the Dolores Huerta campaign, choose one of the donation levels at bit.ly/Dolores84thBDay, then join us in DC on June 12, 2014!